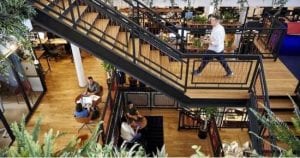 WeWork Cos. now occupies more Manhattan office space than any other company, a milestone that reflects booming demand for flexible workspace among legions of small and midsize firms—and, increasingly, larger companies, too.

The co-working company rents 5.3 million square feet in Manhattan. WeWork calculated that a lease it recently signed for 258,344 square feet at Penn Plaza pushed its total past the 5.2 million square feet of space rented or owned by JPMorgan Chase & Co., according to real estate services firm Cushman & Wakefield.

WeWork is one of the biggest and fastest growing of the “flex space” office providers, a group that also includes Knotel Inc., Industrious Office and IWG PLC. These companies rent office space from building owners, then sublease it for as short as a month or up to three years. They offer tenants greater flexibility than do traditional landlords, which typically lock in renters for a decade or longer.

The New York-based company and similar flex-space operators have made big strides in New York City this year. They accounted for 9.7% of Manhattan’s new leases signed in the first eight months of 2018, compared with only 3.3% in all of 2017, according to real estate services firm CBRE Group Inc.

Some analysts expect flexible space could make up as much as 15% of the real estate portfolios of large companies in the next three to five years.